skip to main | skip to sidebar

To all those interested in the natural world. Please add your sightings.

In the woods we return to reason and faith-Emerson

8-6
The Perseid Meteor showers which peak on the 12th fave me a heads up Wednesday when a single meteor blazed overhead. The Perseids can be a good late night show - if the night is clear. find a site with a good view to the North, spread out a blanket to lie on and watch the show.
Swallows are flocked and can be seen feeding over ponds and still stretches along the rivers. They have finished nesting and abandoned their nesting territories.
Pigeon Horntails use their ovipositor to bore through bark and lay an egg on the wood of deciduous trees. The egg is covered by fungal spores carried in a special pocket in the 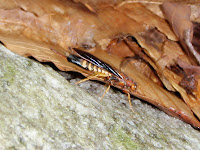 female's abdomen. The grub which hatches from the horntail egg feeds on the wood softened by the fungus deposited by its then long-dead parent. The Pigeon Horntail pictured was depositing eggs -and fungus- on a downed beech on Black Mtn.
John
Posted by John at 5:27 PM

If you want to be able to write new posts just contact Lynn Levine. We are allowed 100 authors. Otherwise, feel free to comment.